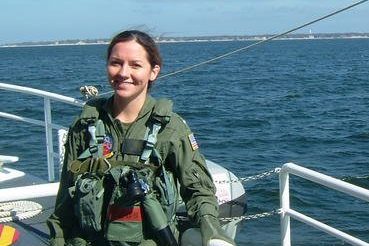 (This post is a dedication to someone that helped me get to where I am right now, and the reason I talk about this now is to pass on to you the same question that changed the way I was living my life.)

Some of you might remember that a few years ago, a military helicopter crashed during a training exercise off of San Clemente Island. This island is about equidistant from both Los Angeles and San Diego, so there was a good bit of press coverage about the accident in both cities. The few remaining bits of news still up on the internet can be seen here and here.

Well, sadly, a close friend and peer of mine was one of the two pilots on board.

She’s actually flying the copter in that pic.

As far as I can find, still to this day, little is known as to what caused the crash that killed all 4 sailors that day (no blackbox was in use in her helicopter type at that time).

Because I didn’t make much effort to keep in contact with classmates from college, and because things like facebook and myspace were created during my last semester in college, I didn’t hear the news until about a week after it happened. And, it hit me really hard.

Laura is, still, the most genuinely nice person I have ever come across. I’m actually not sure if it’s possible to be more pure of heart than she was. The comments still left by friends and family on her myspace profile can attest to how highly she was thought of by those around her.

After the accident, I was left to ask myself a lot of questions. Me and Laura had been together in physics classes and study sessions nearly 8 hours a day, 5-7 days a week, for 2 years. That’s more time than I’ve spent with most of my girlfriends. And, while our relationship was purely as colleagues, it pained me to realize I hadn’t even tried to keep in touch with someone who was one of my closest friends during school. Her passing also left me wondering about how much time I had left in life. She barely made it to see 26. I also listened to the things said by those who knew her also, and I’ve never heard even the slightest negative thing said about her. Ever.

Laura and Jeff had only been married 1 year.


For years and years, I had been hellbent on joining the military. Specifically, so that people like Laura could be safe and making good in the world. Yet, through some twist of fate, I ended up being a civilian and she ended up in the military. In my opinion, Laura contributed more good to the world by just being herself than I ever will even if I spend all my time trying.

And it’s because of that, and one other question that I will pose to you in a second, that I started to change the way I was living my life. I started use the time I had for something positive, for me and for others (and that’s a huge part of how I ended up traveling around the world). I started to look deeply within myself and change the things I was unhappy with. I started to change the way I interacted with people, to be more caring and to be a better friend, to learn to understand others. Most importantly, I started trying to give back to others, what she had given to me. I don’t claim to be a great person, and I make mistakes all the time, but I try to do the best I can. The memory of Laura makes me constantly strive to be a better person.

The biggest realization I had because of her came in the form of a question as I listened to everyone else talking about her. I ask you to take this seriously, for just minute, to think about it, list the names off in your head and think. Because, this is the question that changed the way I was living my life:

For me, this was a day of quiet contemplation and remembrance.

PrevPrevious PostSweet As! (Awesome!)
Next PostNearly Out and About AgainNext