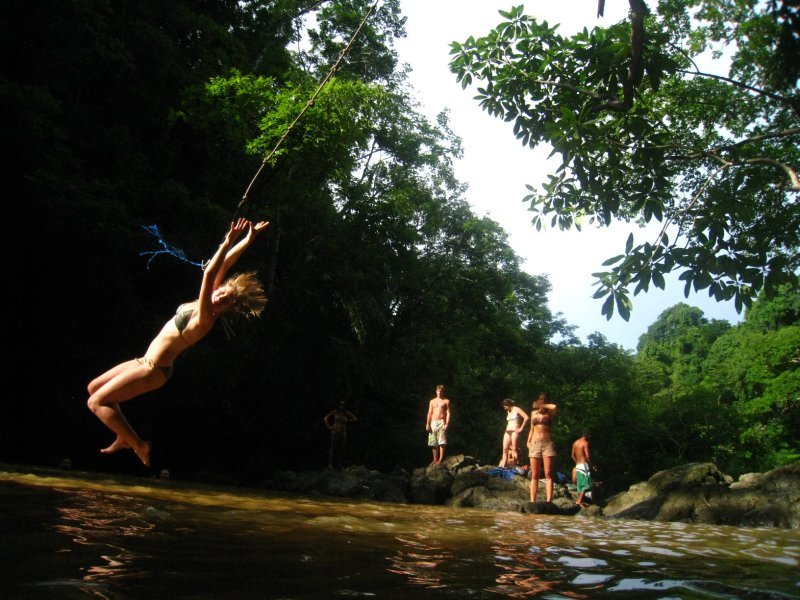 I heard some guy singing this in Costa Rica like his heart was breaking.

If you had asked me when I wrote my last post what I was about to be doing, it certainly wouldn’t have been what happened.

Welcome to San Jose, Costa Rica. I don’t what it is about Central America, but the capital cities of all the countries there are notorious for being gnarly, dangerous places. San Jose was no exception. I actually heard gun shots from my hostel at one point. Needless to say, I tried to spend as little time there as possible.

The next day I was headed for Playa Tamarindo in hopes of surfing the “famous right hander” (a type of wave) there. On the way, at a bus changeover, onto my bus came two girls from Houston and everyone else got off the bus headed for other places. With just the three of us, we were chatting a lot for the next few hours. When we got to Tamarindo, we discovered the “famous” right hander was all of about 12 inches tall. Come on, really? Instead of surfing, me and the girls spent the next couple days hanging out in the sun. We were talking about our plans after Tamarindo and the girls invited me to come with them in a rental car and go explore. I kind of looked at them for about five seconds, shrugged, and said “sure”. I didn’t even know where we were going.

The girls with the bunny that happened to come by us.

The “famous right hander”. Notice the water looks like glass. On a side note, after talking with some serious surfers, it turns out that those waves I avoided in Mexico are known for being psycho stupid dangerous and are actually referred to as the “Mexican Pipeline”. Yikes. And, all the “famous” surf spots in Costa Rica are crap. But, there are good spots in obscure locations. Oh well. I’m going to surf at some point on this trip.

Learning how to do sutures from a veterinarian

My turn, and yes, I’m suturing the bed lol

Wandering around, those specs on the right are the girls

Our yahoo local that decided to join us

Not much of a swing, but lots of <splash>

After heading out of Tamarindo, me and the girls spent almost a week exploring all the miscellaneous beaches going down the northern peninsula of Costa Rica. One awesome day was us just hanging out at a three tiered waterfall, drinking rum and playing on a nice rope swing someone had installed. At that point, we were on the tip of the peninsula. I was looking to go inland and they were looking to go south, so we were gong to split ways the next day. Come a night of drunken reveling…. The next morning I wake up with an ungodly hangover and headed out in a frenzied, mentally-fogged rush. About an hour into the trip, I’m sitting on the ferry inland, nauseated as hell and kind of shaky, when I realize I have the hotel key and car keys in my shirt pocket. Shit! There’s no such thing as lock smiths in Costa Rica, so I basically just stole their car. Trying to get the keys back turned into a rainy, ridiculous side trip.

Zip lining, I couldn’t even see where the line went until this girl was all the way across, it’s at the top of the other side of the valley

I do have to say, Costa Rica is a cool place, much more pleasant than my other destinations so far. Costa Rica is the only country in Central America that requires education for its children (and goes through high school), is the only country with drinkable tap water, and is also the only country that has no standing military. The most common thing you hear in Costa Rica is “pura vida” meaning roughly “pure life” or “full of life”. If you had a good day, pura vida. Lost your job, pura vida. Met a cool person, pura vida. Wanna grab a beer? Pura vida. I can dig that. Life isn’t just about the good times, you might as well enjoy the whole ride for what it is.

Touring a coffee plantation and adjoining processing factory. Pretty much all the coffee in the world comes from down here. This was a bean separator.

After all of this, I was in San Jose again trying to figure out how to proceed. I was going to head straight into South America since it was so close, but many of my destinations are currently frozen. So, I was looking at coming back and it just so happened the cheapest flight for months happened to leave 6 hours after I started my new planning. Much to my own surprise, I was back in the states and planning for Japan less than 24 hours later. If you had asked me at dinner that day what I was doing, I would have said heading to Panama City. Craziness. Either way, switched a bunch of gear out, said hi to some people (if I missed you I’ll catch you soon, I promise), and headed out again. Pura Vida.

PrevPrevious PostPushing the Envelope
Next Post頑張って!!! (Ganbatte!!! meaning Best of Luck!, Go For It!, or Try Your Best!)Next