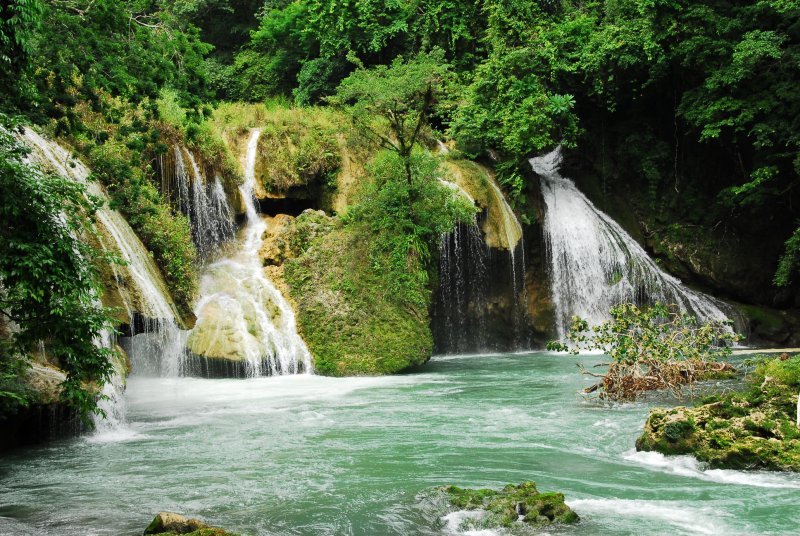 (More music for ya, been hearing this everyday for the last couple weeks)

Slowed down just a bit…

Not sketchy at all when you’re by yourself. (Underground in Mexico)

This post is dedicated to the person who asked me to be careful right before I left.

So whereas Mexico had lots of stuff to see, and not a whole lot to do, this last leg of my trip was quite the opposite, not a whole lot to see, but tons of stuff to do. Moving south of Cancun to Playa Del Carmen was awesome. I was surprised at how much I didn’t like Cancun because I *love* Vegas, but there’s just nothing to do in Cancun but drink. Playa Del Carmen was a much more Vegas-like version of Mexico with a big strip of stores, restaurants, and drinking, combined with all sorts of activities to do around the area. For me, this was a scuba diving haven.

Diving the reefs off of Cozumel.

I found this awesome mural in a semi private courtyard wandering around the night before I left.

The big draw for me here was Cenote diving. When that super huge asteroid hit the Yucatan a long time ago, the surrounding ring was left with a bunch of caves that are now filled with water, making for some awesome cave diving (technically cavern diving in most cases). When I approached one of the few shops that does these dives, I found out that they actually won’t let new divers on these dives because of the insane danger of being in an overhead environment. If something goes wrong with your gear, there’s no surface to go to… you die. In one of the caves I was in, there was even a sign underwater lecturing divers on the fact that over 300 people had died in that very cave. The only thing going through my mind was: YEEEESSSSSSSSSSS. I think the only reason we got to even go in that cave was because all three of us were relatively experienced divers. I’ve also now discovered that my dive certifications, in all cases so far, have made me the most experienced diver in the group besides the dive master. Every trip I’ve done, I’ve been subtly asked to watch out for the other divers. While I don’t mind doing so, this meant that in the caves I got to take up the rear. Because theoretically, I’m the least likely to panic if something happens, because no one will notice until someone turns around. Awesome. Gotta love using the sketchy gear in the third world on top of it. Nonetheless, I plan on coming back to these caves at some point and getting fully cave certified.

I’m sorry, did you say I needed a dive certification for this? …will these do?

Just an innocent crack in the ground from the surface.

This picture is actually perfectly in focus. At this depth the fresh water of the cave mixes with the salt water of the ocean, causing the water to blur like oil and water mixing in a cloudy mess. It just happens that both liquids are clear in this case. Apparently a lot of people panic at this point.

I also like that our dive master rightly felt this was dangerous enough that he was wearing a self redundant rig to handle gear failures in the cave, whereas none of the rest of us got the same. That’s comforting.

By the way, most of these shots were 1 second exposures because it was so dark. Taking up the rear was actually a good thing for taking pictures cause I could lag behind for a minute and float to the bottom where I got to use my whole body as a tripod. Still couldn’t get a lot of my shots though, doh. I need an underwater camera with more horse power than my point and shoot.


After that, I met a small tour group, and after some talking, we realized we were on the same path for a few days so we started hanging out quite a bit. The crossover into Belize was crazy, the moment we crossed the border you could almost feel everything slow down by about 10 or 15 notches, and I could have sworn I heard “I wanna jam it wit you” rolling out of the jungle from every direction. Belize was a crazy place, a mostly African-descent, Bob-Marley-accented English speaking country right in the middle of Central America. Everyone there was pretty cool. We immediately headed over to Caye Caulker, a 200 yard wide strip of sand in the middle of the ocean, which for me meant diving the one of the Earth’s legendary two Blue Holes.

You’re looking at pretty much all of Caye Caulker.

First time I’ve ever seen the sun rise over the ocean.

That what’s I like to see after I was walking in the water, in the dark, the night beforehand. Portuguese Man o’ War, a potentially deadly venomous jellyfish. This one was just a little smaller than a football.

In the Blue Hole. 13 stories underwater looking at 15-20 foot long stalactites. It takes 1,000 years of dripping to grow a stalactite by 1 inch. (Which also means this was dry for a very, very long time)

Also, the dive gear down here is questionable at best. My first stage, both of my second stages, and my BC were all leaking the entire dive. I would have done just about anything for some Hogarthian hoses and back plate… next time I’m bringing my own gear.

That’s a swarm of 8-10 foot reef sharks waiting for us to come back up. Seriously.

The ring of the actual Blue Hole as seen from the deck house. The hole itself is about 1/4 mile across.

The fish were actually bumping me out of their way.

There’s a person in the middle of that. Hah.


Watching the sunset over the ocean all of 200 yards away from the sunrise picture.

After the dives, went out with my tour group friends and was flirting with one of the Canadian girls when within seconds, I suddenly came down with food poisoning. And bad. I’ve never been so sick in my entire life. For the next 8 hours I was violently ill, and the amount of water I was letting out was becoming downright alarming. In all reality, I should have been on an IV (not an exaggerated comment, remember I just got that EMT certification). It was at 3 in the morning that I was sitting against the wall in the bathroom covered in a thick layer of cold sweat, having muscle spasms from vomiting so hard, with my delirious head playing nasty tricks on me, that I wished I was traveling with someone. I’ve since had numerous discussions with people from various countries about the difficulties of solo travel. It’s not easy.

After that, went back inland towards Guatemala.

Another unassuming crack in the earth.


Hanging out before going in.

This cave was considered one of the levels of the Mayan underworld.

You could play these things like an instrument, every spine making a different note. Eerie sound, and awesome as hell.

You’re looking at the face of a God in the shadow.

And someone who got their skull bashed in for said God.


A 12-13 year old girl that got her spine severed in a permanent dancing pose to appease the Water. Only the tip of her forehead stays above water when the cave floods.

Ok, I know this is random, but this is the toilet I was using at my hotel, check the decal… zoomed in on the next pic…

I’m just as confused as you are.

Any hotel that gives me a He-man pillow is legit.

Enter Guatemala, a place with a weird feel. I didn’t find out until right before I left that they only got out of a bloody civil war a little over 10 years ago where thousands of Mayans, the majority of the people there, were tortured, murdered, and their villages destroyed. There’s a very polite, laid back attitude in the country, but you can sense an underlying tension and distrust.

Ruins tend to just stick out of the jungle in this area of the world. Tikal.

Note the awesome way up on the left.

More caving, this time more sketchy and by candle light (which is great when you have to swim and tread water with the candle).


Everyone’s candle ran out before we got out of the cave. Solid.

Hanging out with peeps in the most beautiful place ever, Semuc Champey.


The view from way up above, turquoise water falls and pools.


I took 11 GB of photos in Semuc Champey lol.

The nice hotel I stayed at in Antigua… Rule #3 “We do not welcome drug users / or alcohol consumers; neither hippies, because we have a reputation to look after.” hahah, ok.

Antigua, living the shadow of an active volcano.

Watchin the lava flow. This would never, ever, in a million years, fly in the US.

I was getting literally cooked taking this picture. It was actually painful to stand that close to the lava. Let alone, a rock collapse had just happened 5 feet away from this spot not 3 minutes before this was taken. And, there’s a cold 30 mph wind blowing me around. Safety standards… spsh.


Sadly I had to skip Honduras cause of the issues going on there right now, so I’m rockin Costa Rica. The coffee down here is absolutely awesome. I also realized that I’m moving way faster than I had planned, which means if I kept heading the way I was going I would end up in New Zealand in the middle of their winter. Which is a bummer, because I want to do all sorts of outdoor stuff there. So instead, I’m probably heading over to Japan next. And that being the case, it’d be silly not to stop in San Diego since it’s on the way, so it looks like I’ll be back for a little break in my travels. More to come soon.