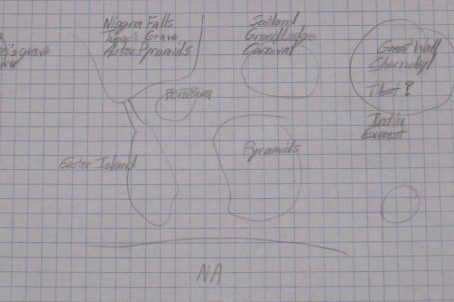 Finally… the news is out. I’m about to head out to travel the world and ultimately end up in London where I plan to live for awhile.

Why am I doing any of this? Well, let me explain. And, let me give you a nudge in the process.

All of this started in the fall of 2006, arguably the lowest point of my life so far due to circumstances that at that time, some of my dreams had gotten permanently crushed. Because I had spent so much time and energy trying to make those dreams a reality, their sudden absence from my life left me in state where I simply didn’t know what to do with my future.

Now, I’m a firm believer that the universe has a way of guiding things, whether gently or harshly, so that things happen the way they should. Those circumstances in my life at the time were no exception. After recovering from the blow life dealt me, I started to wonder what I was supposed to be doing, and I kept my eyes open for a sign.

Interestingly enough, my roommate and old college friend Tom mentioned he wanted to travel in South America, but he never really said much more than that nor did he even mention when he wanted to leave. We gave him a lot of crap about the safety risks involved and kind of dismissed that he was really going to go.

A couple of weeks after that, I ended up going to Germany to visit my grandparents. While it was nice to see my family, especially knowing that I would likely never see my grandfather alive again, it was also somewhat frustrating to have traveled half way around the world to be stuck in tiny village for two weeks with little to do. There were things I wanted to see over there, hikes I wanted to go on, and stops I wanted to make, but couldn’t. On the plane ride back, thinking about my grandfather’s likely near future passing, I opened up my notebook and sketched out some things I wanted to do and some countries I wanted to visit on a crude hand drawn map. I didn’t look at that map again for months.

Two months later, I went to London for two weeks on my first solo trip, and I don’t know what it was, but I absolutely fell in love with the city. The people, the environment, the rich culture, I loved it all. Ever since that trip I’ve wanted to live in London to find out what’s really up there.

When I got back home, a number of events occurred that led into an extremely intense and prolonged period of life discovery. Tom left for his trip, my 26 year old friend Laura passed away, I learned how to socialize better, had a few mentors for business and life, went to survival school… there were a lot of lessons learned that without, I don’t know where I would be today. I certainly wouldn’t be about to embark on this trip.

One of the biggest and most important things I learned to do was to write stuff down. Because if you don’t make some sort of actual note of what you want to do, you have no commitment towards yourself to make it happen. The perfect storm just happened to gather for me at one point that I decided to make an actual life to-do list of everything I ever wanted to do with my life, no matter how big or small (and I exhaustively searched out things I’d never considered before in the process). And I looked at that list, every single day, always asking what I could do that day, that weekend, that month (and also what did I have to save money for, what was free, what was close by, etc). The single most difficult thing on the list was traveling the world, copied straight from that crude drawing made on the way back from Germany. Looking at Tom do it, I knew I could too. It was just a matter of saving up money and finding the right time.

I must say, one of the hardest things was figuring out what to take. I can pretty much live indefinitely out of this (how much do you pack for trips? lol):

Some people have known about this trip for awhile, and some of them have looked at me like I’m insane or with the attitude that they couldn’t do something like this themselves. So let me give you a nudge to follow your own dreams because you certainly can do this too.

A few weeks ago I was walking around downtown in an attempt to tie up some loose ends before my departure, and I happened to see a block of text in a window that I’d never seen before. Considering the amount of time I used to spend downtown, I was confused how I could have passed this over so many times, so I walked across the street to look at it. Much to my confusion, it didn’t seem to be a part of anything. It was just written on a random window with nothing behind it. And it was profound. Below is the picture I took of the window.

I couldn’t have put it better myself. I had to look it up when I got home, and apparently this is part of an Addidas ad campaign. Even more random. But nonetheless, the point remains valid.

You can change anything in your life that you want. You can be anything you want. You can do anything you want. YOU are the only one preventing you from having those things. If you ever kill a day by spending it in front of the TV, ask yourself: “am I going to be happy with my decisions when I’m on my death bed? Would my time have been better spent helping others? Meeting new friends? Visiting places I’d only seen in pictures and movies? Trying a new hobby? Learning a new skill?”

There’s a lot out there. All you have to do is take it. No one is stopping you but yourself.

Write your desires down. Make a list. Look at it. You *will* get whatever you want.

So for me, this is the culmination of years of desire, years of planning, years of working towards one of the biggest goals I’ve ever had. Quit your job and travel at will to see the world, impossible? Hardly.

Thank you to all the people who have imparted their wisdom on me and grew along side me over the last few years. Without you, I wouldn’t be at this moment. And at least for now, farewell to all the friends down here in San Diego, I’ll miss you guys.

On the 28th, off to Mexico City to start!