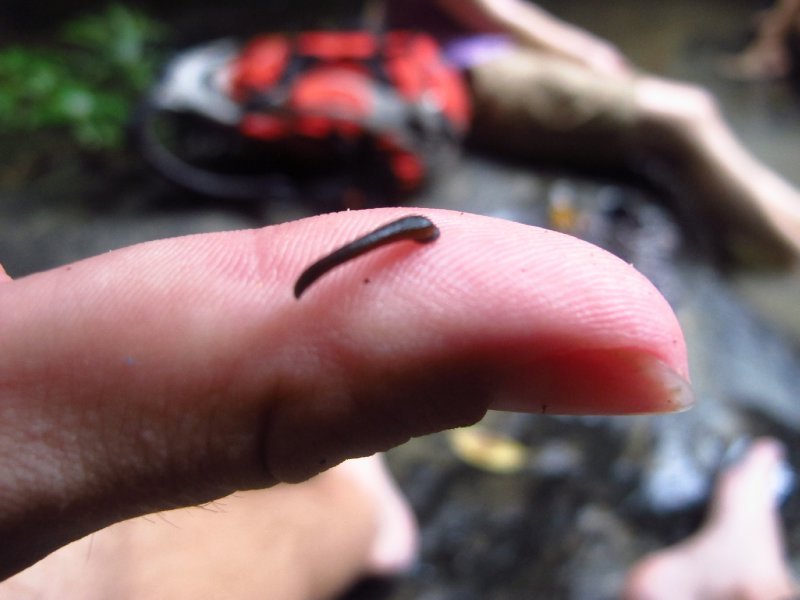 Heard on the beach while watching the sun set over the ocean in Borneo.

After leaving Singapore, I headed over to Borneo. Not too many people head that way, but that was actually part of why I wanted to go there. After months in Australia where I couldn’t meet any Australians, and time in Bali where it was full of drunks and the culture had been partially destroyed by tourism, I wanted to head somewhere that was “pristine” as it were. Plus, there’s some really cool caves over there in the middle of the rainforest, so why not?

Turns out it was totally worth it. Good food, few tourists, and nothing but locals around.

While I was there I ended up getting the job offer that took me to England. But, I got it while I was deep in the rainforest, so I had to go through 2 more airports before I was even able to get back to the US to pack and head to England. It was a crazy rush.

Not really too much more to say about Borneo and Malaysia. It was pretty crazy that I was literally a week or so from being in Thailand and then ended up on the other side of the world, and this happened pretty much on the fly.

As for now, the project I came to England for has finished up and so I’m moving on. Going to head through Europe and then back to the US. Europe isn’t exactly exotic to anyone, so I’ll probably only make one blog at the end. We’ll see how it goes.

They’re really big on cats in Kuching, and I have no idea why.

This is one of the tastiest things I’ve ever had. If you ever find Malaysian food somewhere, try laksa.

The fancy Government building. Both of the Malaysian states on the island of Borneo are autonomous, so while they consider themselves part of Malaysia, technically this is a separate country/territory, meaning you may get stamped out of the regular Malaysian Peninsula and into Malaysian Borneo depending on your immigration officer. So this is the parliament building in one of the two Bornean states.

My first leech. Man these little guys are hard to get rid of. You rip one off and it immediately bends around backwards and latches right back on. You’ve got to catch them pretty quick or they really dig in, and then you kind of have to tear them off, which makes you start bleeding everywhere. Fun times.

Hanging out by a waterfall in the middle of bloody nowhere in the primary rain forests of Borneo.

Those are tens of thousands of bats flying out of a monster cave in waves.

I almost broke my arm here by slipping on the rock. Awesome. What I did do was get a small open wound, which then promptly got filled with bat poo. Later in the day when I got back to the incredibly slow satellite internet connection there was a frantic search for “can you get rabies from getting bat shit in an open wound?”. (Turns out the answer is no, rabies can only be spread by getting bitten. Who would have guessed?)

Up above the rainforest.

Nice skull at the entrance to a cave.

And now a bunch of cave pics:


Look at the size of these!!!! The biggest looking one, was in fact, the largest cave in the world until just recently when another one was discovered in (I think) Vietnam.

Niah caves from the inside, and with some size perspective (those are people in the second one). These caves are a bit closer to civilization (outside Miri), and easy to navigate, so you just walk by yourself through the cave.

Water drops falling through a hole.

Inside one of the caves, this time by myself and in the pitch blackness where loads of flies that live off of poo reside. I was desperately trying to keep the poo flies out of my mouth.

Another traveler gave me a Burmese cigarette, which was quite good. The tobacco had strong hints of anise.

Getting back to civilization after days in the rainforest. I think these are rice terraces? Maybe?

The Petronas towers in Kuala Lumpur. These guys are the headquarters for a oil company, and there’s a huge mall at the bottom.

Being in a predominantly Muslim country is a bit different.

The huge Lord Muruga statue outside the Batu caves. Basically these are temples to the Hindu gods, but inside mountainous caves. They’re pretty cool.

Stories of the Hindu gods.

And another separate cave.

This was wild. Inside the airport in Kuala Lumpur is a small outdoor waterfall garden that’s completely surrounded by the terminal itself.

On my flight back to the US from Tokyo. I love Mos Burgers (a Japanese chain), but the fact that my inflight meal needed instructions was almost too much to deal with after 3-4 hours of sleep over 48 hours.

And those mosque pics:

Inside the prayer room of a massive huge mosque in Kuala Lumpur. This was my first time in a real mosque, and I still wasn’t allowed to step into the main prayer room, but I could at least see into it. I would have thought it would be more elaborate in a mosque, but I was told the artwork is not supposed to compete with the beauty of God, so everything is kept simple.

I had to dress appropriately to get into the mosque (my legs were exposed in shorts).


Some other pics of the mosque, outside the prayer room.

And now the bugs:

This is a crazy rainforest tree that is partially sentient in the sense that it’s part animal, part plant. When you touch the spines, the entire plant cringes and makes a whoosing noise in the process. Do it enough times and it causes all the insects around the plant to attack whatever is annoying the plant.

Big caterpillar that just so happens to be mild poisonous. Touch this thing and you’ll start itching like crazy. I asked what would happen if you ate one, and they looked at me like “why would you ask such a stupid question?”.

Stick bug. Easy to see here. Not so easy to see when it’s on a plant, as so:

I had a hard time seeing pretty much anything in the rainforest. I am not visually built for trudging the jungle apparently. “Oh, look at that branch, I’ll grab that to help me along…. <gets bit by giant poisonous bug>”. Most of the stuff I did see was along the walkway cause it had nothing to camouflage against.

Can you see this one? Zoomed in:

Hell if I know. Looks scary and has a head for it’s butt.

And some centipede love. That’s a serious hug.

That is one incredibly big snail.

And an army of something…. possibly ants? lol